Still in
Cape Town...
Another delicious AND pretty, high protein, low carb meal by my sister.

My sister coached me to make an Indian curry. Lamb / mutton


Check out my Instagram for more of what I eat on my weight loss journey @Babalwa.Brook.

When the head chef is otherwise preoccupied, I throw whatever is in front of me on a plate and call it a meal. As long as it's very low in carbohydrate content, we're good as gold!
One of my sister Pumla's favorite TV Chefs has a restaurant in Cape Town. We took an Uber there and stuffed our tummies silly, taking home lots of food. We sat outside, that's the only way to dine when the restaurant has indoors and outdoors dining anyways, in my opinion! As soon as I sat down to eat, a dirty piece of plastic, landed on my plate! I had to get another plate.

Restroom break with Pru, aka Pumla after the above lunch.

We met up with one of her people who was interested in buying some stuff from me. We went to a coffee shop down the street and sat there for hours. She bought a few of my bags, which was nice. Thanks for your support!

We called for our Uber, who's family to pick us up. It was rush hour traffic. He showed up and ran around to the passenger's seat, so guess who drove home and paid for it?

One of Pumla's neighbors runs a Thai / Vietnamese restaurant. Pumla ordered us a meal from her. It wasn't half bad. The lady was very friendly.

I gave one to Pumla's friend. He picked the pink one. Good choice!

I spent a decent amount of time and got a lot done in Cape Town. Time to head out East. Port Elizabeth, here I come!

I crammed everything into these three bags and put one of the bags inside one of these. Heavy As fck! I took the bus to P.E..
Am I really back in Africa?

I listened to music on my iPod, was harassed by the bus driver who wanted me to give him money under the table to cover my heavy bags. I recently told someone that story and said that the driver wanted me to bribe him. The person I told told me that bribe is voluntary, the driver was blackmailing me. I was like, OMG! You're right!


Eventually, I gave the guy money. I had no choice. Trust me! Welcome to third world life!

I bought some of the things I used to enjoy before America to see if I would still think they're bomb. The chips on the right, are very much like Cheetos. Both were OK. Ghost pops won this round.

Every now and again, I will stumble upon Cadbury's chocolate. When I do, I am very likely to buy it and eat immediately. Top deck was a fave because of the combination of dairymilk and white chocolate. Best of both.

Mama, I'm home!
Mom showed up in no time, flat. There were some interesting people on our bus who were very curious about me. It made me feel less than comfortable, so as soon as we entered my town, I called mom and told her to be at the bus stop when we arrived. She was there within a few minutes. She's awesome! I hadn't seen this chick in several years! It was soooooo good to see my mom again, yall! She looked good too!

Mom driving and telling me stories about my father. I am here for it!


A lot of memories were made in the above location. The houses you see in the background weren't there when we lived there. I was there from birth until age 10, then off and on during boarding school breaks until mid teens.Plaid shirts weren't planned.

I have on one of the nailpolishes that I got with my room at my sister's. My mom sells everything. This didn't help my diet. I would eat so well and snack on so much sugary, junk. Everything's so cheap too. She loved it. I would be her first order of the day as she's about to head out to hustle. She would tell me I was giving her luck for the day. and you're giving me carbs for the day, mom! You're welcome!

I took mom grocery shopping and did a price comparison video between prices in South Africa and in The States. Click below to watch.

I ate a lot of fish in South Africa! All the towns I was in, were by the ocean. Yesss! 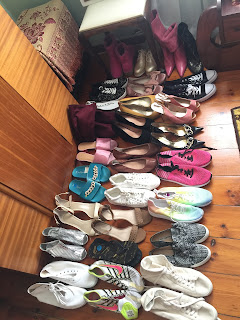 I tidied up my room. Shoes for sale!

Between the clothes my mom sells and the stuff I brought with me, child! As if all that wasn't enough, there were tons of things I had left at mom's when I went to Georgia and then when I went to The US.
I did a video going through the stuff I hadn't seen in forever. click below.

I gave some of the things I had left at home to mom and my other sister and I took a few pieces with me. I didn't have room for extra things, so there was that! 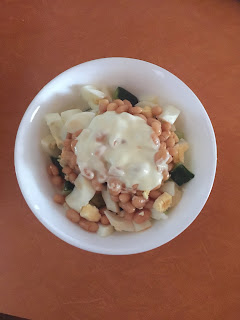 Mom made us chicken feet.

I made her brown bread from scratch.

Here's how I made the above bread from scratch, so you can make your own.

The above bread came out so great. It had been forever since I had made any such thing  Mom loved it!

This soup was nuts! I wish I had some right now!

Walking back home is tricky because dogs and politics. So, you're dodging streets with lots of dogs.


I made my sister do yoga with me like I did Pumla in Cape Town, haha. She obliged and did so great! She's very athletic! She literally runs marathons.

Almost time to head to my third destination, so, laundry!

It felt quite nostalgic using the laundry line after so long.

Thanks for coming on this ride with me. I shall update again soon!